Who is behind EGU? 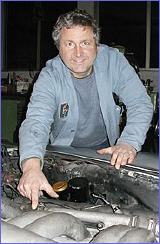 DEVELOPMENTAL HISTORY: His love for the automobile and motorcycle began very early in the life of Uli Egetemeir. As an active “Crosser” he was required to turn screws,nuts and bolts,subtilize and improvise. After a necessary apprenticeship in the automotive repair field where he gained the
Knowledge needed after years of training he attained the title of Master.

In a garage in Fellbach-Oeffingen Uli Egetemeir founded his Firm EGU in 1979. 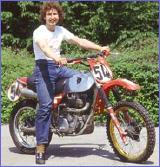 With Hans-Peter Mayer as pilot the EGU-Yamaha with its 660series engine was able to capture mostly the front positions. In September 1990 Hansi Meyer won first place at the Daimler-Benz race.
The SOS-Team developed out of a group of Crailsheim grease monkeys and Uli Egetemeir. The short term “SOS” stands for the 1988 founding of this class in the motor sport and means simply “Sound of Singles”.
Solid,robust one-cylinder four-stroke engines of variable fabrications were ingeniously and laboriously and painstakingly engineered and made “hot”. They were then installed in various different frames.

...and in the same year received the Baden-Württemberg Award applied to a regulated catalytic converter for fuel-injected and carbureted engines.

Presentation by the Economics Minister of Baden-Württemberg Martin Herzog for exemplary accomplishments for future guaranty of the handicrafts.

1999: EGU-Senior colleague in the Mercedes Factory

The former Mercedes racing mechanic Josef Egetemeir was VIP-Guest by the Racing Team.

On the occasion of the 80th Anniversary of Moto Guzzi Uli Egetemeir was guest at their plant.